Officially, Grand Rapids had 10.4″ of snow on Saturday. That was a daily snowfall record for G.R. It’s the 4th day this winter that we have had 7 or more inches of snowfall in a single day. That gives G.R. a season snowfall total of 42.8″ already – that’s more than half of the average snowfall for the entire winter! Average snowfall-to-date for Grand Rapids is 18.5″. So, that’s 24.6″ above average.

The G.R. National Weather Service said: “THE MOST IMPACTED COUNTIES WILL BE MASON, OCEANA, MUSKEGON, OTTAWA, LAKE AND NEWAYGO, ALONG WITH ALLEGAN, VAN BUREN AND KENT. MOST OF THE WESTERN TWO TIERS OF COUNTIES WILL GET IN THE ACTION BY THE TIME ITS WINDING DOWN ON SUNDAY. ACCUMULATIONS IN THE COUNTIES THAT SEE SNOW THE BULK OF THE TIME WILL LIKELY HIT THE 6 TO 12 INCH RANGE OVER THE 48-60 HOURS…FOR THE SNOW LOVERS IN THE CROWD, WHAT SNOW WE DO GET THIS WEEKEND WILL STICK AROUND NEXT WEEK WITH HIGHS IN THE 20S.” – That was a pretty good forecast. 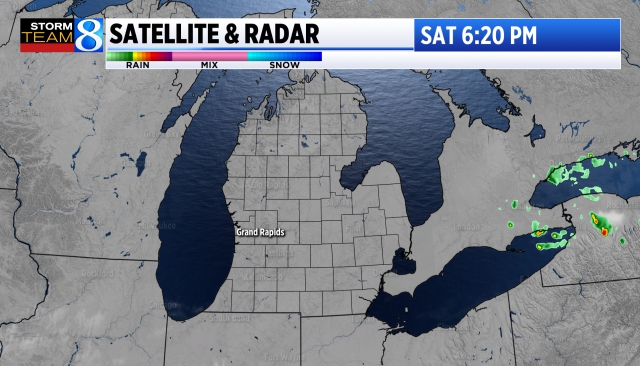 Quite a few roads are (especially side streets and rural roads) are still snow covered and slippery.

An area of light snow may move through the area (esp. north of Kent County) Monday night into Tuesday AM. This could produce an inch or two, along with some slippery spots for the Tue. AM commute.

A satellite view that shows this massive storm system that has brought tornadoes to the South, a blizzard to the Upper Midwest and snow to West Michigan.

Wednesday night it was quite windy, with gusts to 45 mph in Grand Rapids and 51 mph in the Muskegon Area. The peak gust in the state was 62 mph near Mackinac City. Here’s video of branches falling on a power line…fire and flashing.

Here’s storm reports from the Storm Prediction Center for Tuesday PM into early Wednesday AM. Fourteen tornadoes were reported. A few of these will likely to be duplicate sightings of the same tornado. Three fatalities was reported near Keithville LA. Check out the twin waterspouts off Panama City FL on Weds.

Here’s damage from a tornado that struck north of Deberry TX. A tornado caused 5 injures near Grapevine TX. Video of the Grapevine Tornado crossing highway.

32 tornadoes reported in LA, FL and MS as of 4 am Thursday AM. Winds over 60 mph were recorded in LA on the Lake Ponchartrain Causeway. As I write this, I haven’t seen any reports of fatalities or serious injuries.

The map above shows Storm Reports from Thursday PM/night. There were three small and relatively inconsequential tornadoes on Thursday…two in Mississippi and one at Kenneth City FL near Tampa. There were four reports of wind damage. No injuries were reported with the line of storms that pretty much moved from northwest to southeast across the whole state of Florida.

The other big storm continues to be the Arctic cold that’s coming down into the contiguous U.S. (including Michigan) from around the 19th through much of the rest of December:

The latest 8-14 day temperature forecast from the Climate Prediction Center has colder to much colder than average readings for most of the county. Only California and a sliver of western Nevada are expected to see above average temperatures. The core of the cold for this period is expected to be over the mid-Mississippi Valley.

Here’s the overnight run of the GFS model high and low temperatures for Grand Rapids. The model shows high temps. in the upper 20s Saturday thru Tuesday the 20th. Then the real Arctic air moves in with highs in the tens from Wed. through Christmas Day. It gives G.R. a high low of 12/-6 on Christmas Eve and 18/0 on Christmas Day. This is probably overdone. The Lake Michigan water temp. is still around 40°, so the Arctic air should warm 10° crossing Lake Michigan. However, that 40° water has the potential to produce some significant lake-effect snow.

Starting Thursday night, West Michigan is going to see an extended (days) period of lake-effect snow and snow showers, slick spots on the roads and temperatures below average. Some spots will likely get a foot or more of snowfall. This push of Arctic air will likely push down across the Rio Grande into N. Mexico with the cold front clearing SE Florida.

ALSO: Yikes! Temperatures as cold as -78F in Siberia! “Space hurricanes” swirling over the Earth. Pancake ice in Scotland. 3 feet of snow in South Dakota. 4 feet of snow in 10 days. Heavy rime on trees, a blanket of snow and a cow!

Weird Sports Stat: The Vikings have a 11-3 record, though (as I write this at halftime of the Colts-Vikings game), the Vikings opponents have scored more points than they have! Reminds me of the 1960 World Series between Pittsburgh and the Yannkees. Pittsburgh won the series 4-3 games, despite the fact that the Yankees outscored the Pirates 55-27.

As a rare green comet gets closer to Earth, get the …

If you know where to look and have the right equipment, you just might be able to catch a glimpse of the green comet this week.

With their minimal, often single-ingredient formulas, The Ordinary and The Inkey List both provide an affordable way to get skin care tailored to your concern.

Ice fishing is a sport of patience and uncertainty. With an ice fishing camera, you can all but eliminate the uncertainty and closely observe your prey.

Otsego will vote on public safety millage in May

Over 30 soups to be featured at Soups On For All

Otsego will vote on public safety millage in May

Over 30 soups to be featured at Soups On For All

KCAS Pets of the Week: Minerva and Pi

Remembering the blizzard of 1978

2 plead in shootout after graduation at East Kentwood