Snow showers have diminished and will totally end later this Sunday. There are drifts are as high as 2-3 feet in a few places. Here’s the latest Grand Rapids NWS Forecast Discussion, Michigan weather observations and a Michigan weather map. The pic. above is +14″ of snow on the ground in Middleville – from Kaylie Sayer.

The Winter Storm Warnings and Advisories expired this SUNDAY at 3:30 am.

Temperatures will hold in the 20s Sunday, below freezing. Watch out for icy spots – especially on sidewalks, driveways, side streets and lesser-traveled roads. Snowfall on Thursday totaled 7.6″ officially in Grand Rapids at the Ford Airport. That was a record snowfall for the date. Kalamazoo totaled 5.1″. Then we had 7.0″ at the Ford Airport on Friday and 8.7″ on Sunday. That’s a 3-day total of 23.3″. The snow settles down – some of the air comes out of the snow – so we had significantly less than 23.3″ on the ground…it’s around a foot of snow cover.

Here’s a picture of the snow in my backyard – early Friday afternoon. The fire pit has almost disappeared. I didn’t measure, but it looks like a good foot of snow here in Comstock Park.

Winds will be west or west up to 15 mph – still causing a little drifting. 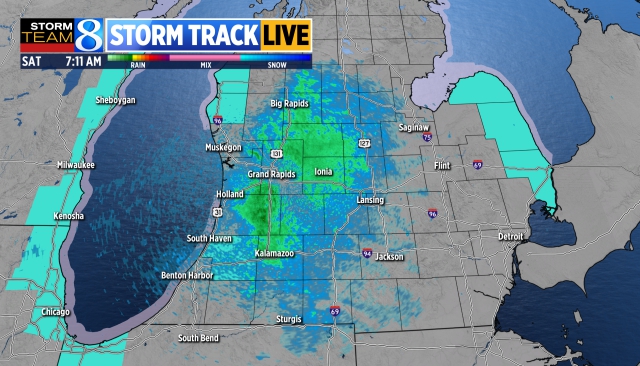 ‘Much of this snow will melt next week as temperatures climb back up to 40 degrees.

Michigan’s ski season opened this weekend. Ski Brule in the U.P. – often the first resort in the state to open, was open this weekend. Lift tickets were half-price this weekend. Several other resorts are hoping to be open for Thanksgiving Weekend.

Also, check out coverage of the amazing lake-effect snowfall around Buffalo NY. the highest totals here reached 4-7 FEET of snowfall. They have had thundersnow and snowfall rates up to 3″ an hour for 3 days in a row.

Bring your kids to work? Day care coming for Gentex …

Time running out to avoid strike at Kalamazoo hospital

What is the white paper revolution?

Create a festive Christmas party with these mini …