Rainfall was significant over much of West Michigan this past weekend. Here’s a link to some rainfall totals.

Grand Rapids had 1.85″ of rain on Saturday and that was a record for any August 13th. It was a soaking rain that should really help most farmers (the hay that was cut didn’t need to get wet like that).

There was a lot of water in Pentwater…over 3 1/2 inches of rain fell there. Fortunately, we did not get any reports of any significant flooding.

Grand Rapids had 0% sunshine on Saturday and just 2% sunshine on Sunday. The last time we had back-to-back days that cloudy in August was in 2009.

Here’s North American snow and ice cover. You can still see a few yellow dots on the south shore of Hudson Bay, so there is still a little ice there. It’s possible that floating icebergs – too small to see from satellites – might linger until the end of August in Hudson Bay. There is still snow on the highest peaks in Washington State, on Mt. Hood in Oregon and in British Columbia and Alaska.

In the pic. above you can see Mt. Adams in the distance – also covered with snow. At the Paradise Weather Station in Mt. Rainier National Park, they recorded 708″ of snow this past winter!

We should be dry in West Michigan from today (Monday) through Friday. No 90’s in the next week and probably beyond. 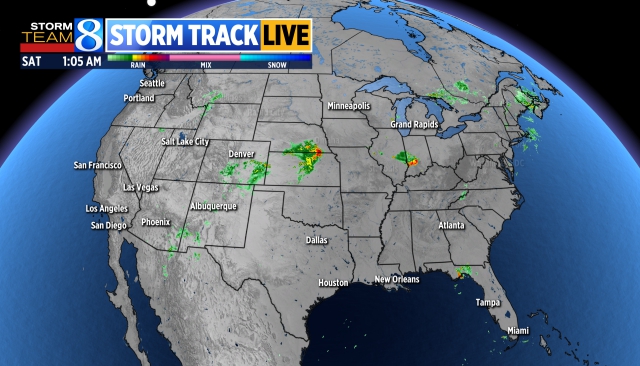 National radar – some showers in S. Texas as I write this and in the desert Southwest. The tropics remain unusually quiet. We have not had any Atlantic named tropical storms since Colin weakened to a tropical depression on July 2nd, and none forecast for the next 5 days per National Hurricane Center. The last time that the Atlantic had no named storm activity between July 3 and August 16 was 1999.

Semitruck rolls over on I-196 ramp near Zeeland

Semitruck rolls over on I-196 ramp near Zeeland

Chefs competing for good cause in West Michigan

Gas jumps 40 cents at some stations, refineries to …

Gas jumps 40 cents at some spots, refineries to blame