Nearly a foot of snow has fallen in a few spots. I’ve got about 8″ of new snow at my house. A few other snow totals: 7.6″ at the Ford Airport as of midnight – a daily record for Nov. 17th. Grand Rapids is now up to 11.6″ for the year and it’s not impossible that we could be headed for a top five snowiest November. Kalamazoo measured 5.1″. Howard City 10″, Lakeview (Montcalm Co.) 8″, East Gr. Rapids 6″. Thundersnow was reported east of Wayland.

A blast of Arctic air will continue to slam into Michigan. Expect snow (and bands of moderate to heavy lake-effect snow), breezy conditions (that will cause drifting snow) and cold daytime temperature only in the 20s. 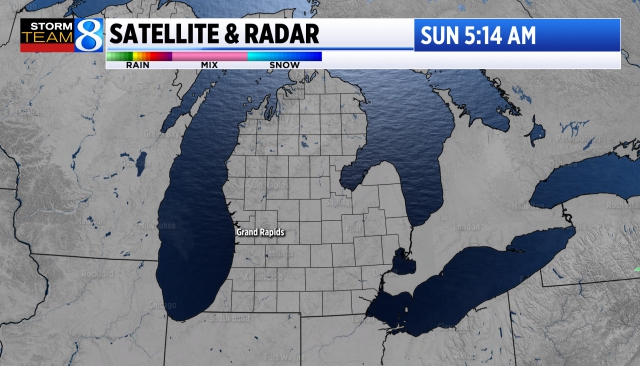 In Indiana, there are no counties under a Watch or Warning – With a due west wind, the significant snowfall will be north in Michigan.

There is also a Winter Storm Warning for Emmet and Charlevoix Counties and a Winter Weather Advisory for much of the rest of Northwest Lower Michigan. The counties in the warning should see 7-10″ of new snow.

The graphic above is from the Weather Prediction Center. It’s the probability of 4″ or more of snow in the next 72 hours (thru early Sat. AM). You can see the high (+80%) of that happening downwind from Lake Michigan. We should expect more Winter Storm Warnings or Winter Weather Advisories. This is from the Gr. Rapids National Weather Service:

WIDESPREAD SNOWFALL THURSDAY THROUGH SUNDAY—   “ANY BRIEF RESPITE FROM THE UPCOMING SNOW WILL END BY THURSDAY AS A NEAR TEXT BOOK LAKE ENHANCED SNOW SET-UP WILL SETTLE OVER THE REGION THURSDAY THROUGH SUNDAY.   THERE WILL BE SOME MINOR BREAKS BUT WE COULD SEE SOME POTENTIALLY SIGNIFICANT LAKE EFFECT SNOW AND TRAVEL IMPACTS.

A DEEP UPPER TROUGH THAT WILL EXTEND ALL THE WAY BACK TO HUDSON BAY WILL DEEPEN SHORT WAVE TROUGHS PROPAGATING AROUND IT. THIS WILL DROP NEAR RECORD COLD TEMPERATURES FROM THE WEST AS SEVERAL SHORTWAVES PASS THROUGH. WHILE ACCUMULATIONS COULD REMAIN MARGINAL AT FIRST, THERE WILL HAVE BEEN ALREADY TWO SNOWFALLS TO COOL THE GROUND, ESPECIALLY ALONG THE LAKESHORE.

STRONG NORTHERLY FLOW WILL SET UP WITH A DEEP OMEGA FIELD   THURSDAY THROUGH FRIDAY. THIS WILL ALLOW FOR THE POTENTIAL FOR   SIGNIFICANT ACCUMULATIONS ACROSS LOWER MICHIGAN WITH THE HIGHEST AMOUNTS WEST OF THE US 131 CORRIDOR.     THIS WEEKEND WILL SEE HIGHS STRUGGLE TO GET OUT OF THE 20S. SO PREPARE FOR THE FIRST BITTERLY COLD TEMPERATURES OF THE SEASON. AS PREVIOUSLY MENTIONED ANY LINGERING WARMTH OF THE GROUND MAY ACTUALLY EXACERBATE IMPACTS AS THE FALLING/MELTING RE-FREEZES ON THE ROADWAYS. THE PERIODS OF SNOW ALONG WITH THE POTENTIAL FOR REFREEZING ON THE ROADWAYS COULD BRING A TREACHEROUS COMBINATION OF TRAVEL CONDITIONS.

Most of West Michigan saw 1-3″ of snow Tuesday. It accumulated on the grass and a little bit on lesser-traveled roads. A good portion of the snow melted on more heavily-traveled roads due to some road salt and the heat from the friction of the car tires, but some slick spots are possible on main roads, too. Around 2″ of snow fell across the I-96 corridor from G.R. to Lansing. Temperatures were mainly in the low 30s, close to the freezing mark. However watch out for slick spots during the early morning.

At sunrise Wed. it was 24 degrees and a little light fog at my house. Lots of leaves dropped to the ground from my silver maple last night. There were slick spots Wed. AM. Kent Co. was working 5 vehicle accidents as I type this around 7:30 am.

Very heavy snow has buried the Buffalo NY area. They also reported thundersnow. The Buffalo Airport said snow was falling at the rate of 3″ an hour! Williamstown NY had 2 feet of snow and it was still snowing hard there. Other snow totals from NY: 12.5″ Warsaw, 12″ W. Seneca, 10.8″ Golden, 10.5″ Palmero.

Thanks for signing up!

Watch for us in your inbox.

Body of missing Indiana man found in water near Sturgis

Griffins act as servers for ‘Tip a Griffin’ on Monday

Body of missing Indiana man found in water near Sturgis

Griffins act as servers for ‘Tip a Griffin’ on Monday

GRPD: Suspect killed self after shootout

Griffins act as servers for ‘Tip a Griffin’

W MI native survives illness as baby to shine at …

GRPD: Murder suspect killed self after shooting at …

Give joy: Apply for Christmas aid or host an Angel …

12 best Elf on the Shelf accessories

Best gifts for a best friend